Today I want to have fun and also make an experiment with my personal slave: I want to test the resistance of his balls to traction. I have put him on all fours and tied his testicles very tight with an elastic rope that I have then attached to the hoist. His balls are fully exposed and I have left him in that position for almost half an hour, while I was working at the computer. Now I’m back, his balls are almost black: it’s time to start the experiment. I’m going to whip him in that position; if he moves, he puts his balls definitively at risk!! I start hitting his back with my single tail. The tip of the whip is stinging his skin and he starts squealing and wiggling. I tell him that, each time he cries or moves, I will pull up his balls a little more with the hoist. I increase the intensity of my strokes and he cannot help crying; I’m having a lot of fun watching him to try not to loose his balance each time I lift the hoist. In the meantime the whipping continues: his back is now red, while his balls are dark blue. Since he cannot stop complaining, I have to pull up his balls more and more: he is standing now. I go on whipping his back. One more pull up and he is on his tiptoes, trembling, trying desperately not to fall down. To make things even worse for him, I handcuff his wrists on his back, so that he cannot use his arm to keep his balance. The experiment is successful, his balls are still attached to his body. I leave him there, let’s see how long he can resist.
Tags: Whipping, Corporal Punishment, CBT, Female Domination
Share on Twitter 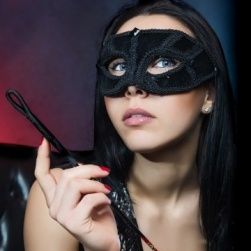 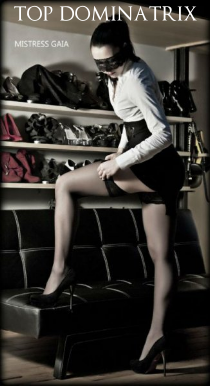